We took a fun and interesting half-day city bus tour including Nijo Castle, Golden Pavilion and the Imperial Palace. Our local guide, Yumi, was a little Japanese Ever-ready Bunny. Keeping up with her orange pom-pom amidst the crowds of tours and school children was challenging. But, it was a beautiful, warm day.

Nijo Castle was built in 1603, and was the home of the first Shogun.
Yumi lead use through the many halls with differently painted ornate ceilings. She described how the Shogun lived and used each room. All rooms had murals painted on every wall. Some murals were meant to portray power, others peacefulness. This was his temporary residence. His wife lived in Tokyo. The entire building was constructed out of Japanese Cypress. It had a Nightingale Floor that squeaked like a bird to warn against Ninja attack. It was plainly beautiful; not loudly painted or ornate.

Next we visited the exquisite Golden Pavilion. This is a lovely building covered in gold leaf. It sits in the middle of a beautiful pond with gardens that "borrow from nature", meaning it uses existing landscape features in the planning of its gardens. It is a beautiful place.

Lastly, we were escorted through the grounds of the Imperial Palace. We walked all around the outside of the buildings and the garden with the same landscape style as the Golden Pavilion in that it "borrowed from nature": tall trees symbolize mountains, pond symbolizes ocean, rocks symbolize the beach. It is beautiful and peaceful.

When we returned from the tour, we walked to To-ji Temple. It was the Shogun`s home, and his birthday was on the 21st of May. So, on May 21st every year, the public is invited to the grounds to hold a huge flea market. We got there late, but it was very much a flea market like any other, just more Japanesey. We had fun.

Legs, hips and feet were killing us, but I wanted a drink. There was an Irish pub outside Kyoto Station, do we dropped in. It was like Cheers bar in Boston. We chatted with foreigners from Canada and the US who now live and work here. It was great. We made new friends and hobbled out smiling. It was a great end to a lovely day. 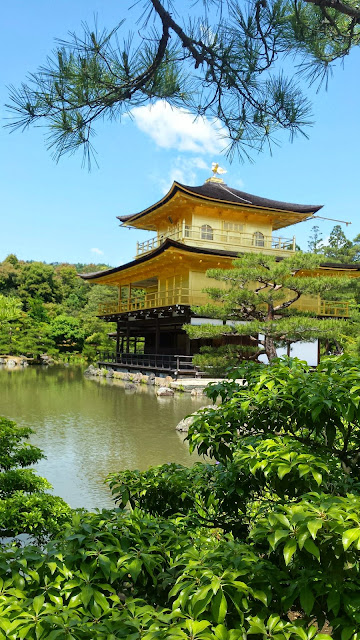 Posted by Kathy Crowley-Gardner at 3:17 AM

Kathy Crowley-Gardner
I retired over a decade ago, and have spent my time exploring the next phase of my Life. I began by blogging and moved into traveling with my husband and writing a children's book series called Logie Bear & Friends Adventures available on Amazon.com.