Today was our Ph.D. defense in Kyoto public transportation. We found the local bus that took us southeast of Kyoto Station to the station a short walk up hill to Fushimi Inari Shrine. We never saw such a place.

The shrine is a menagerie of orange gates surrounding small shrines leading to the thousand gates. The gates have so many levels, all up hill, that we gave up before reaching the top on Mt. Inari. It didn`t matter. What we saw was magnificent.

A small group of uniform-clad school girls lead by their teacher asked us if we would speak English with them. I got them to say, "Go Red Sox!" It was precious. We took pictures of each other and continued on our respective ways.

We found our way back to the train station and figured out the stop closest to Sanjusangendo. This is a temple that houses "the thousand armed Kannon": a thousand, golden, multi-armed gods with 28 soldier gods in front and a huge Shiva-like god in the middle. It was incredible. No photographs allowed. We had to remove our shoes. The building is the longest wooden building in Japan. I lit a candle and said a prayer there.

We got a curry lunch, then boarded another train that took us to the furthest northern part of the city. There we walked to the Kyoto Handicraft Center. I was able to completely finish my souvenir shopping there.

After disembarking the train at what we thought was the closest station to Kyoto Station, we got lost. We were hot, tired and had aching lower halfs. It was not close, and we kept turning around until we got past buildings that blocked the Sky Tower, our landmark. GEEZ.

Yoshino flew in so we met him for dinner. Tomorrow he has big plans to show us Nara: home of the largest Buddha and the oldest temple. Stay tuned. It`s our last day of vacation. We can`t believe it. 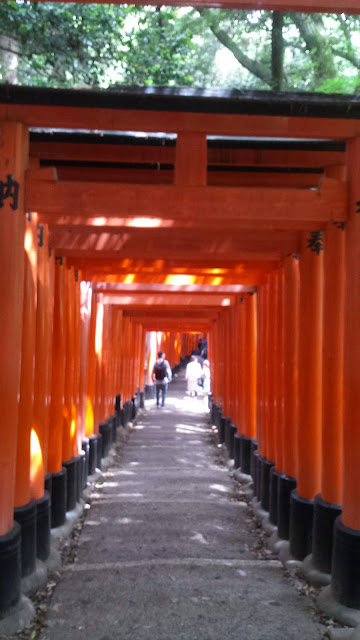 Posted by Kathy Crowley-Gardner at 4:44 AM

Kathy Crowley-Gardner
I retired over a decade ago, and have spent my time exploring the next phase of my Life. I began by blogging and moved into traveling with my husband and writing a children's book series called Logie Bear & Friends Adventures available on Amazon.com.